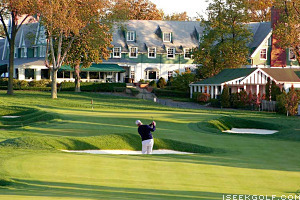 My brother-in-law, Lee, and I have a lot in common, in addition to having married twin sisters (one each) and being next door neighbors.   We both like to cycle (although he knows what he’s doing and can analyze the strategy of the peloton vs. the breakaways in the Tour de France, while I just pedal and pant), we’re pretty handy and enjoy building things, and we both love to play golf.  We’re pretty competitive, too, but unfortunately we also share a tendency to succumb to the occasional soul-sapping shank.

Yesterday I beat him out of six bucks.  We always play a three dollar Nassau, and he was putting just awful, which is rare for him.  He grips his vintage Bull’s-eye putter with his index finger down the shaft, legs spread wide like he’s expecting the deck he’s standing on to surge, and makes everything.  But yesterday he couldn’t drop a marble in a rain barrel, and until I started spraying drives on the last few holes and let him get a half on the back, I was crushing his spirit and mocking his aspirations.  He always pays promptly (and expects immediate payment, too.)  So why did he have such a big grin on his face when I saw him later?

About 5:30 last night Lee’s phone rang.  It was his son-in-law, David, calling.  Could Lee jump on a plane in the morning and fly out to Pittsburgh?  To play in the member guest?  At OAKMONT?  He ran it by command central and got approval from the Chief, so this morning at dawn I heard the cab pull up and Lee walking down the stairs with his golf clubs and his suitcase, heading east.  The force field of joy emanating with every step washed across the lawn, and America’s happiest man headed off to the friendly skies.

To find out how Lee did, see http://theaposition.com/johnstrawn/golf/golf/personalities/290/happiest-man-returns-to-earth